Here at PythonAnywhere industries, there’s nothing we love better than a bandwagon. Plus the logos are so cool! So it’s docker-fever in the office. 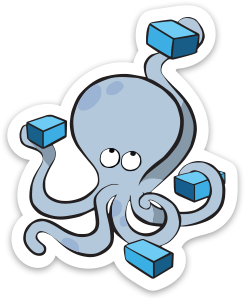 In all seriousness, we’ve been rolling our own sandboxing/virtualisation/isolation solution and evolving it since the very first days of PythonAnywhere (4 years ago, if you can believe that), based on chroot and cgroups and all that wonderful containerey stuff. But we wanted to investigate Docker as an alternative shrinkwrapped solution, and the first step of that is ready now.

The first element in our beta is “Docker consoles”, which takes our normal execution environment and dockerizes it. We’d love to have a few of you join the beta and try them out:

The consoles will look exactly like normal consoles, with all the normal “batteries included” libraries and python packages available

A few small additional things will work that didn’t used to:

Some limitations and known bugs¶

Give us a shout via support@pythonanywhere.com and we’ll switch on docker consoles for your account.