The main driver for our release this morning was a move, behind the scenes, to put our servers into a “VPC”, and despite the fact that it’ll have no visible impact, it was a significant change to the infrastructure, and not without its challenges, as you’ll hear in more detail from Giles later :) 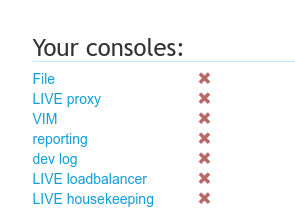 One change you might notice is that the Consoles page has changed, and includes some little red Xs for killing consoles. The original idea was just to change them from being links that cause a page refresh to being ajax calls, which would let you kill multiple consoles at the same time. Somehow though, that small user interface tweak turned into the whole office deciding to treat that How it feels to learn JavaScript in 2016 comedy blog post as if it were an instruction manual, and we have now spent several days knee deep in React, ES6, promises, webpack, npm, Enzyme, fetch, promises, promises, and many, many more. Still, by the end of it, it all worked, and we have to conclude that ES6 is much nicer to work with than horrible old javascript.

The tarpit is one of the key ways we balance the resource needs of our various users. What happens when you exceed your CPU quota is that your processes still run, but they get a lower priority compared to people who are still within the amount they paid for. That’s been working fairly well, but as with all things, we notice there’s a power law at work, and there are a small number of users who regularly go massively over their tarpit limit. We’ve added some code that will automatically kill processes of these kinds of users, and send them a friendly notification email. Bad programmer! No biscuit.

We’ve also added some code to limit the amount of output in consoles, so that kids (and adults) whose first Python program is while True: print(“farts”) will have less of an impact on the system. Although plenty of farts will still be printed, fear ye not.

The upshot of all that should be that console performance will hopefully be a little more consistent from now on.

We do our best to avoid the classic Anglocentric, parochial laziness of imagining that the world ends with ASCII, but it takes work! For a while we’ve known that users on certain operating systems with certain keyboard types & layouts would have difficulties entering certain text into our consoles. So we’ve rolled out the ability to switch from hterm to xterm.js for our client-side terminal emulation.

If you’d like to try it out, give us a shout and we can switch it on for you. NB - keyboard shortcuts for copy + paste will be different, it’ll be Ctrl+Ins / Shift+Ins instead of Ctrl-C & Ctrl-V.

And the usual retinue of bug fixes. Some of which were (minor) security fixes, incidentally, as reported by some enthusiastic security researchers. Find out more about our bug bounty if that describes you!