Honestly, it’s strange. We’ll work on a bunch of features, care about them deeply for a few days or weeks, commit them to the CI server, and then when we come to deploy them a little while later, we’ll have almost forgotten about them. Take today, when Glenn and I were discussing writing the blog post for the release

So actually, dear users, lots of nice things to show you.

People have been asking us since forever about whether they could use PythonAnywhere to share code with their friends. or to show off that famous text-based guessing game we’ve all made early on in our programming careers. And, after years of saying “I keep telling people there’s no demand for it”, we’ve finally managed to make a start.

If you open up the Editor on PythonAnywhere you’ll see a new button marked Share.

You’ll be able to get a link that you can share with your friends, who’ll then be able to view your code, and, if they dare, copy it into their own accounts and run it.

We’re keen to know what you think, so do send feedback!

Another feature request, more minor this time; you’ll also see a new button that’ll let you change the version of Python for an existing web app. Sadly the button won’t magically convert all your code from Python 2 to Python 3 though, so that’s still up to you…

When there’s a bug, or your code raises an exception for whatever reason, your site will return our standard “Unhandled Exception” page. We’ve now enhanced it so that, if it notices you’re currently logged into PythonAnywhere and are the owner of the site, it will show you some extra debugging info, that’s not visible to other users. 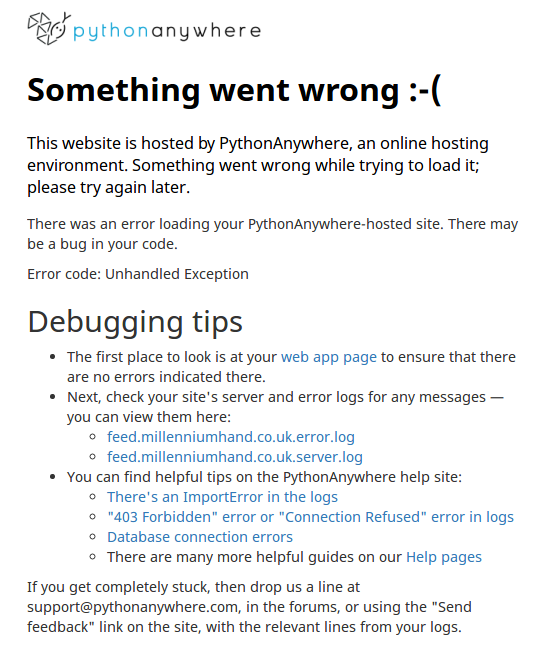 Why not introduce some bugs into your code and see for yourself?

ipad fix, and other bits and pieces¶

We finally gave up on using the fully-featured syntax-highlighting editor on ipads (it seemed like it worked but it really didn’t, once you tried to do anything remotely complicated) and have reverted to using a simple textarea.

If you’re trying to use PythonAnywhere on a mobile device and notice any problems with the editor, do let us know, and we’ll see if we can do the same for your platform.

Other than that, nothing major! A small improvement to the workflow for people who downgrade and re-upgrade their accounts, a fix to a bug with __init__.py in django projects,

Keep your suggestions and comments coming, thanks for being our users and customers, and speak soon!